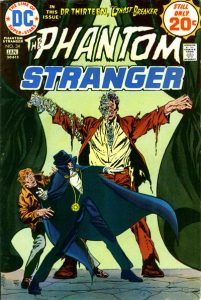 What a great cover. I don’t remember when or why I bought this comic. It wasn’t kept in my long boxes. It was in a stack of stuff in the back corner of my office for the longest time. But what a great cover.

Of course, this does not happen in the book. At all. It comes to close to almost having some of the elements here. And I guess that on a metaphorical level, you could make the case that yes, a cyborg man is revealed to be behind a curtain of sorts.

The story is okay, but there weren’t many scenes in the story that would tease the actual twist and also be interesting to make someone like me see this in a back issue bin at a comic shop and decide it was worth the $2.50 risk.

I wish the story was the one from the cover instead.

Oh, and Phantom Stranger is there mainly to tell the brother the needed exposition after things happen.

Meanwhile, you’ve got Dr. 13, the “ghost breaker”, investigating a ghost that can’t be a ghost because there’s no such thing even though the other half of the book is devoted to a character who actually IS a ghost.

And the ghost ISN’T real. No. As they investigate they find a picture of the man taken five years ago, who looks exactly like the ghost only the ghost looked 13 years older. “Of course!” Dr. 13 exclaims! It now all makes sense to him. The old man has been studying increasing metabolism and speeding up bodies “like that comic book character The Flash” and now he’s moving faster but can’t control it. So he’s aging faster.