It’s October 23nd. Part three of three first issues in Marvel’s classic monster offerings. These are books I’ve read before, long ago, and would LOVE to do some podcasting about them. For now, this is better than nothing. 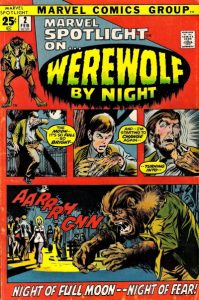 Moving away from classic literature, but not from Mike Ploog, we get the modern take on the werewolf in WEREWOLF BY NIGHT as it gets its tryout in MARVEL SPOTLIGHT.

The star of this is very, very clear. It’s Mike Ploog. Any monster comic with Mike Ploog doing the art chores is going to be amazing, especially when the writing plays to his strengths. And this one absolutely does, with its flashbacks on the moors and the creature on the beach.

And then there’s the animal violence of the creature. The werewolf fights a real wolf, a mugger, and a killer. And the raw violence is thrilling in just the right way. The werewolf transformation sequence is as visceral as any pre-“An American Werewolf in London” movie sequence. The story is emotional and looks great and sets up a series based on , one can assume, the curse of the werewolf and how it affects Jack Russell’s life. It’s a “monster as superhero” trope ala Incredible Hulk, but it’s a proven trope.

But, yeah, the werewolf’s name is Jack Russell. That’s unfortunate.

All three of these series are good, and all three of their opening chapters are really good and hit the Monster Horror Comic target well. It was nice to take these three days and devote them to issues I knew I’d enjoy!