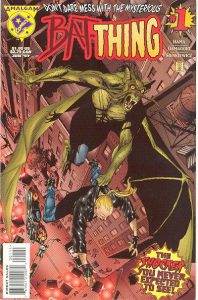 When Marvel and DC teamed up for Marvel vs. DC, they briefly merged their universes and characters, resulting in things like JLX, Iron Lantern, Lobo the Duck, and Spider-Boy. They all made sense as they merged characters that were similar in type.

And so one of the less obvious pairings occurred here. Instead of merging Swamp Thing with Man-Thing (to create Swamp-Man. perhaps?) they took the scientific background of Man-Thing’s Ted Sallis and merged that with Man-Bat’s Kirk Langstrom. Of course, the names, each starting with “Man”, probably also factored into this.

The result is a really cool looking creature. With Man-Bat’s basic physical form and Man-Thing’s swamp based flesh, the flying beast is a menacing creature with a tragic backstory (like Langstrom, he has children and a wife that he left behind when he became the creature).

The story is a good done-in-one horror story about a creature that is killing people around Gotham, but nothing is what it seems. Most of the twists are just what you’d expect, but that doesn’t diminish the pathos.

The artwork is fantastic, fitting the story perfectly. This one was a fun one to pull out of my long boxes.