It’s October 25th. Today and tomorrow, some comics that came out just this month! (Both of these are comics that will share their own 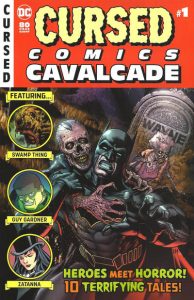 In the last few years for many holidays, DC has been putting out anthology books like this. $9.99 cover price, perfect binding, 80 pages, no ads. They then feature many different characters, some super popular, some more obscure, in stories that are themed to the holiday.

Swamp Thing, the character I’m most interested in, has featured in many of these collections. Last year, he had a haunting Christmas story and an interesting Valentine’s Day tale. And now, he has the opening story in this Halloween collection.

A quick rundown of the stories:

All in all, most of these stories work because they deal with the character involved in a personal way. I appreciate that. This is probably what separates good short story collections from bad. A short story needs to use the short length it has to the fullest, and the best way to do that is to give a snapshot that has emotional consequences.