It’s October 27th. A comic I got just TODAY! Apparently a reprint of a classic story I’d never read before, written by Neil Gaiman and drawn by Dave McKean… 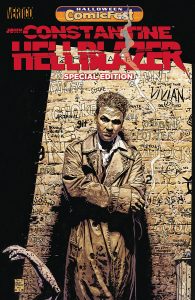 The Halloween Comicfest is essentially a Free Comic Book Day styled event for the Halloween season, allowing comic shops to give out free COMICS instead of CANDY. There were a number of comics to choose from, including Archie, Goosebumps, Hellboy, Spider-Man, and a manga Frankenstein.

I chose John Constantine because of the creative team: Neil Gaiman and Dave McKean.

Of all the people who I have never met that had an influence on me creatively, Neil Gaiman and Dave McKean could probably be top of the list. The Sandman comic series is probably the single biggest reason I was drawn toward wanting to create comics. It set me on that path. And their graphic novels — Mr. Punch, Signal to Noise, and Violent Cases — were also big influences on me and my early comic book writing (none of which, by the way, has ever seen the light of day).

And so I chose this, not knowing what it was. Hoping it was a “done in one” story, not a cliffhanger hooking you to buy a trade collection.

Turns out, it was a “done in one” story meant to hook you to start buying the new Vertigo titles “from the mind of Neil Gaiman”. Ah, good. This comic is a reprint of John Constantine: Hellblazer issue #27. But I’ve never read it, so it was new to me. Also good.

The story: a ghost haunts a London apartment complex, killing people by taking their warmth. Meanwhile, John Constantine is at a party for a friend who passed away the year before and a woman hits on him, intending to seduce him. In the end, the real horror is not the ghost, but the existential horror that we are all alone in the darkness, and any connection we have is fleeting and temporary, and probably an illusion or a lie.

The script: Neil Gaiman is a masterful writer and this is no exception.

The art: Dave McKean makes the mundane feel both wonderful and horrible at the same time. As a result, his artwork perfectly suits Gaiman’s writing. They are one of comic history’s greatest duos.