It’s October 26th. Today and tomorrow, some comics that came out just this month! (Both of these are comics that will share their own 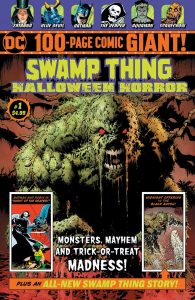 DC Comics put out TWO anthology horror books this year. Cursed Comics Cavalcade was in comic shops and followed the trend of their other holiday titles. But this one — Swamp Thing Halloween Horror — was in the style and pricing of the Wal-Mart exclusive collections. $4.99 and 100 pages. All of the other Wal-Mart exclusive books reprint old issues alongside a single new 10-page story.

This book is no exception, the different being the old stories go deeper into DC’s catalogue.

Over all, this has been my favorite 100-Page Giant Was-Mart exclusive issue.