It’s October 21st. Part one of three first issues in Marvel’s classic monster offerings. These are books I’ve read before, long ago, and would LOVE to do some podcasting about them. For now, this is better than nothing. 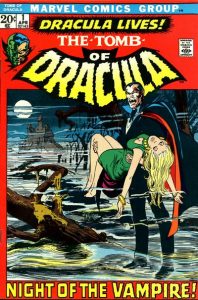 THE TOMB OF DRACULA is in my opinion one of the greatest runs of comics of all time. Seventy issues, all of them drawn by Gene Colan and 90% of them written by Marvel’s Wolfman. It’s, simply put, a great run of comics. (One I’d love to podcast about, if I wasn’t already falling behind on the Marvel sci-fi stuff…)

That doesn’t make this bad. It’s not. It feels like a Universal movie. Or a Hammer movie. There’s mists and villagers and romance and tragedy. A love triangle between Dracula’s distant ancestor Drake, Drake’s girlfriend Jeanie, and Drake’s business partner who’s also the girl’s ex-boyfriend becomes something more sinister when Drake’s business partner wakes up Dracula. The love triangle shifts into something between Drake, Dracula, and Jeanie.  And therein lies the tragedy.

The comic is definitely set up to a series. It’s also a sequel to Stoker’s original novel. And, for my current purposes (reading just one issue) it’s a decent single chapter.

Colan’s artwork is outstanding. The script by Gerry Conway is good. The story is compelling, but it’s more that I know the heights this series goes to that makes me want to continue.