It’s October 20th. An anthology book based on an anthology series. I have very low expectations . . . 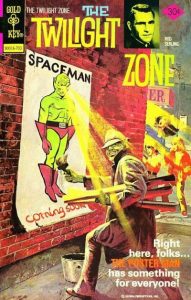 Not going to lie. Because there’s no reason to. I only got this because it was $1.

Also, my expectations are, as I said above, low. It’s an anthology book with 3-5 page long stories. Every publisher I’ve read who does anthology books has done some good work and they’ve all published some books that just stunk.

So with that in mind, I started reading this one. And my low expectations were met and exceeded. Which is to say, it was better than I expected.

The cover story was possibly the most effective as it was about an alien invasion accomplished via mail order posters in a story that was SURROUNDED by mail order ads! (Although I can’t help thinking they stole the premise from Ray Bradbury.)

There were a couple other stories that were decently written and illustrated. I could tell that the writers and artists were having fun. At least, it seemed like they were.

Also, it was far more enjoyable for me than the Harlan Ellison comic.

Maybe because they were coming from a place of fun and not of utter cynicism?