It’s October 18th. Another comic that I remember reading long ago (2000! Y2K was a plot point, even!) but don’t remember much about. 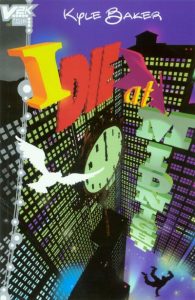 I DIE AT MIDNIGHT: DC Comics; by Kyle Baker; published 2000 (at least, that’s what the BOOK’S COPYRIGHT says, but not the solicited release date)

Vertigo produced a line of comics under an imprint called “V2K”. These books were put out in the year 2000 to celebrate the new millennium. The only one that interested me was this one. A one shot, 64 page book that came out on Wednesday, December 29, 1999. I don’t remember what put Kyle Baker on my radar back then, but he was the reason I was interested. The style of the book was also no doubt a draw for me.

I remember reading the book 18 years ago. But it’s been so long that the details were gone. I just remembered the animated style and the feeling that this could very well be storyboards for an animated short film.

Reading it now, I still believe that. But it’s so much more.

I cannot ever remember reading a comic and feeling as tense as I did reading this tonight. The high concept: a man has an overdose of drugs in his system and he has, on what is coincidentally New Year’s Eve of 1999, until exactly midnight to get the antidote.

And a race against time begins. With a ticking clock and obstacles in their way, there are moments of genuine emotion and fear peppered with moments of very dark humor. It’s a masterful work and one where the impatience of, for example, reading large blocks of text is intentional, as the character himself just wants to get past the words coming at him.

And a child pushing all the buttons on the elevators has never been so frightening.