It’s October 17th. This time, the SEQUEL to a comic book I wrote! Well, sorta kinda. I once wrote an adaptation of The Legend of Sleepy Hollow. So sure, it’s not my ORIGINAL story, but here’s Marvel’s sequel to it… 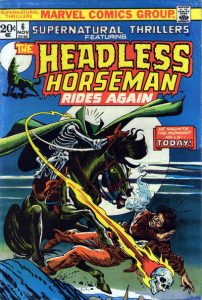 “He haunts the midnight hills–TODAY!”

So like everyone else out there, I was hoping to eventually find a version of The Legend of Sleepy Hollow where the part of the lanky, superstitious, self-absorbed school teacher is taken by a cocky, tough as nails private detective.

Meanwhile, bad guys were hired to kill Duke and the widow. With a bomb. That’s shaped like a brick that they threw through a window. Duke survives and chases them down, but their boss, who killed that best friend because he was meddling, doesn’t want to pay them for doing the job, so he dresses up as the Headless Horseman and causes them to go off the road. And he scares Duke into the hospital.

Duke discovers that the boss has a GLOWING HEADLESS HORSEMAN costume in his office. (Yeah, Duke does some breaking and entering to find this out.) After he finds this out, he drives back to his best friend’s widow/current love interest’s house and drives through Sleepy Hollow because it’s the quickest way . . . but he’s confronted and driven off the road by, you guessed it, the Headless Horseman.

And yet, he survives his car diving into the river on the bridge. And then . . . the police tell him the boss couldn’t have done this . . . because he died the night before.

But it was still better than Sledge Hammer.