It’s October 28th. I plan to end this crazy challenge with some old school horror comics. What’s up with doing three comics printed in 2018 in a row? Nay! Today I bring you… 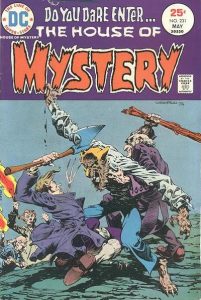 I’m guilty. I totally judge a comic by its cover. I buy comics because they has a cool cover. And this one? A wolf man fighting villagers and drawn by Bernie Wrightson!!!

…is not what’s inside.

Oh, sure, we get a werewolf. And the art is pretty dang good in that first story! It’s just not BERNIE WRIGHTSON doing it.

There are two stories in this, and Jock Oleck delivers fairly decent short form horror fiction with both of them. Just not great.

In Way of the Werewolf, a werewolf is being hunted down by villagers who cannot kill it because the Baron wants the werewolf taken alive. A peasant couple takes him in while he’s in human form, and care for him. He thinks they’re idiots. How could they not know he’s the werewolf? But on the next full moon, they ensnare him. See, they have a secret: they are vampires and they are going to give him to the Baron so they can be left alone. But after they turn him in, there’s another twist! He has a secret. He’s the Baron! And now he knows what they are! So he has them killed.

In Cold Cold Heart, we have a bad dude and a rich nice dude who are identical twins. This allows the bad dude to switch places with his brother before his brother goes into cryogenic sleep. You see, he’s put all his assets into investments that will be available when he wakes up. Evil brother cannot abide that, so he kills his brother and takes his place . . . and sleeps through an alien invasion, only to wake up centuries after humans have been exterminated. Now, the last human, evil brother is about to be vivisected.

This falls into the category: bad person does bad thing and gets ironic retribution from the universe. It’s clever. And absurd. But it’s dry and just doesn’t hit well.