It’s October 29th. Time to take a look at a classic Marvel horror title, this time one of their black and white magazines. 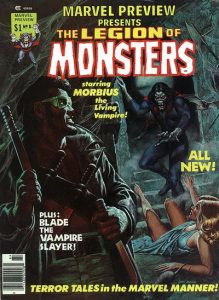 I remember buying this magazine because I had another comic that had the “Legion of Monsters” title and Man-Thing was an important featured character in it. And Man-Thing was listed as appearing in THIS magazine.

And he DOES. Sort of, in a black and white full page pin up drawing inside the front cover and in a image illustrating an article about the “history” of Marvel horror magazines.

Not exactly what I was hoping for. So I never read the magazine until now. I figured a Halloween themed horror comic binge should take a look at at least ONE of the Marvel b&w horror mags.

There were four stories in this:

The Madman of Mansion Slade features Morbius as he seeks a cure for his vampire-like disease. Reaching out to an old friend for help, he finds that his friend is also dealing with a monster that lives in the moors outside his mansion. The twist? Spoiler alert, although you probably already see it coming just in two sentences if you ever consume these kind of stories. His friend is the monster. But it’s a nice twist, because his friend is not an actual werewolf, but is a scientifically created werewolf type creature.

Into the House of Terror! features Blade coming to destroy a nest of vampires, but they are children! Centuries old children, but children none-the-less. And . . . again, spoiler . . . he can’t bring himself to kill them but is able to build up the courage because they monologue too long, giving him time and resolve as they tell him their “take over the world” plan.

The Reality Manipulators features a guy who is on his way to testify before congress, but in a swamp he finds a monstrous representation of his lover, men who shoot at him, and a lot of paranoia and hallucinations. Maybe.

Finally, Curse of Anubis! has an archeologist disturb the resting place of Anubis and finding himself under a curse, with a twist.

All four of these stories are great, with art by some of the most amazing, moody artists out there. (Val Mayerik on Anubis; Michael Ploog on Reality Manipulators; Gene Colon on the Blade story; and Sonny Trinidad on Morbius. Trinidad is the only artist I’m not familiar with.) These black and white magazines lend themselves to moody artwork, and the staples of great horror art are all there: energetic motion against realistically realized settings.

As disappointed as I was when I first bought this to find that Man-Thing was not in it, I enjoyed reading it for this blog-y journaling thing…