It’s October 30th. One more day until Halloween and one of my “grail” comics. But for now, another horror anthology book with a terrifying looking cover… 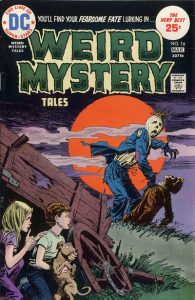 A solid anthology book, this cover seems to present a horrible situation. Look at those kids cower as they hope the killer in the scarecrow costume doesn’t know they’re there. But he’s taking time from his murdering the random adult to look over.

It’s not in the book.

Oh, there’s a scarecrow. But if this cover comes from a story, look somewhere else for it.

The Curse of the Fool Moon is a werewolf story that is very 70s, as a picked on nerd turns to the occult to get his revenge. But when the book he uses to transform into a werewolf is destroyed by his mother, there’s no turning back.

The Witches’ Way has a similar theme, as a young duchess doesn’t want to gamble that the line of succession will make it to her, so she turns to black magic to kill those before her in the line to power. But when you use the power of the witch, you become a witch . . . and so she turns instantly ugly and never gets to sit in the throne.

Neely’s Scarecrow also has something of a shared theme. Where the kid and the princess are trapped as dark creatures, in this a jerky young man turns to crime to get the money needed to impress his girl. On the run, he dresses up as a scarecrow and puts himself up on the post, where he intends to wait until people stop looking for him. Unfortunately, at the beginning of the story he played a trick on some kids to make them believe the scarecrow was alive. So they go back tp prove that the scarecrow is alive . . . by stabbing it with a scythe in the back. “See, I told you it wasn’t alive,” one kid shouts as they run away. The guy became a scarecrow after invoking the scarecrow, and he’s stuck being a scarecrow for the rest of his life.

Which was really short.

Hm. After discovering this kind of linked theme (if you become the monster, you’re going to stay the monster) throughout the whole book while writing this review, I like this book a whole lot more.