It’s October 31st. Halloween. I’ve made it… Today’s book was a comic I’d been on the lookout for. You can hear a longer version of this blog post on the podcast here:  A WEIRD WAR TALE: Week of Weird Day 7 – CBTM140 (Ben) 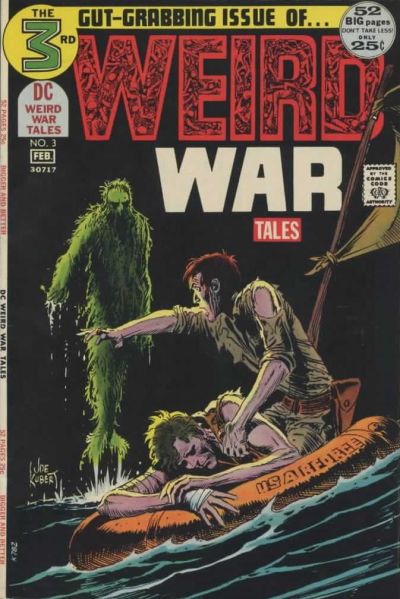 This is, as he cover loudly proclaims, “The third gut-grabbing issue of Weird War Tales. 52 BIG pages. Don’t take less! Only 25¢.” I don’t see how these pages are bigger than another other comic book’s, but “52 standard sized pages” isn’t as snappy.

It’s a “grail” comic for me. I’d seen this cover somewhere and have been wanting to find a copy of this comic for a while now as part of my “judge a book by its cover swamp monster collection.” Yes, looking closer it seems to be seaweed, but that doesn’t matter. What’s inside? All I know is that this is an anthology title and that later issues that I already had in my collection, well, aren’t the best of comics.

Opening Story: The opening is a wordless story, except sound effects, as we see two American Air Force pilots get shot down in a World War 2 battle over the ocean. They crash. The survive. They wait on their raft. One of them is hurt and unconscious. The other alive and hopeless.

This is the story from the cover.

And yet . . . it’s something different. Something unexpected. Something weird.

The conscious pilot sees a star in the heavens — the only star in the dark night sky. It descends. Takes form. It is the creature. Even though it seems to have come from the sky, it is made of seaweed and drips water.

And it speaks: “Take heart, young warrior…all is not lost! You are not alone! The deeds of brave men lost in war’s holocaust float on the silent waters about you! Do you not see them? Perhaps…you do not even see me? Then…let me TELL you of the others. LISTEN…”

Yes, the seaweed creature is this issue’s HORROR host! The framing device for the stories, many of them reprinted from comics two decades previous.

Been Here Before! by Bill Finger and Ross Andru & Mike Esposito, reprinted from G.I. Combat #44, from January 1957. This is a little bit of a head trip, as it’s almost a time travel story but it’s unclear if we’re in the “future” (during action in World War 2) experiencing a vision of the past or if we’re in the “past” experiencing a vision of the future. This ambiguity adds some nuance and it’s a story that takes a little bit of thought as you read, giving it a level of depth not often found in these short stories.

The Cloud that Went to War! by Dave Wood and Ross Andru & Mike Esposito, reprinted from Our Fighting Forces #17, also from January 1957. Did you read the title? Well, that’s what this is about. There’s a cloud. There’s a war. The cloud helps the protagonists.

The Pool… by Len Wein & Marv Wolfman and Russ Heath. This one seems to be a new story for this comic, but it’s also a story I’d already read! This one was reprinted in a graphic novel collection called “America at War: The Best of DC War Comics” and it’s a fantastic collection. This story also plays with narration technique, exploring how the more things change the more they remain the same. In some ways, it reminds me of Kubrick’s 2001 in how it looks at the past and the present. Two groups of men fight for control of a pool, one prehistoric, one in WW2. The stories are mirrors of each other and both end the same way, on a nihilistic note. It’s cautionary nihilism and ends with a “stamp” kind of caption: “Make war no more.” This is a well crafted and original. And horrific.

Combat Size! by Bob Haney and Russ Heath, reprinted from Our Army at War #66, from January 1958. And so we move from gritty and meaningful, to “zany Haney” (as Emily from the Relatively Geeky Network, and specifically I remember her saying this on her Shortbox Showcase series on the network) calls tales written by Bob Haney. This one is just plain weird as, with no explanation other than a Rod Serling-esque philosophical musing by the Seaweed man saying “Through waves of time things that appear to be reality may indeed be illusion! Such is the tale of a soldier’s stature…” So we move into the story. A soldier on the march starts shrinking, but uses his short stature to his advantage, choosing not to let it stop him in the battle against the enemy. He starts feeling bigger than he ever did before and he grows to being a giant. It’s presented in first person narrative as if it happened like this, but it could be metaphorical. He felt small and success allowed him to feel bigger as he faced down a plane.

Pilot for a Sub! by Bill Finger and Mort Drucker, reprinted from Our Army at War #68, from March 1958. A pilot fish loses his shark companion in a battle and adopts a submarine as his new shark. It goes through battle with them and then helps guide them through a corral reef that’s trapped them. Yup. We get shrinking soldiers, a helpful cloud, and a fish friend in this issue.

And then Joe Kubert wraps everything up with two more pages. The seaweed man tells his tales and then makes to leave, but the two men beg him for help. But is he there, or a figment of their imagination?

This was in no way what I expected this issue to be. It didn’t have the story I expected, but then it threw me a curve ball as the creature became the HOST of the book. In between, he tells us two really good stories and three kind of dumb ones, but none of them are horrible and maybe in a different mood I’d have liked them differently. But then the ending, tying the stories together with the creature finishing his tale . . . and giving them help and hope . . . even if he was imaginary . . . it works. As far as framing for a book like this, I enjoyed this much more than the Cain or Abel or Eve frames in some of the other DC horror books. I’m curious how many of these other early Weird War Tales are like this.