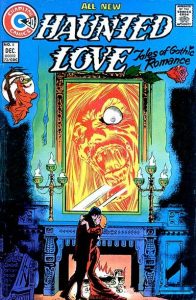 First, the cover. It was the cover that caused me to buy this issue when I was going through some cheapie back issue bins. It’s the eye. With the red and yellow image of the hag and the white space of the eye juxtaposed against each other as she looks down at the couple in their embrace, I thought this at least would be worth the price of admission. And it was . . . kinda. I mean, if good horror makes you FEEL and THINK, this certainly did. It made me feel uncomfortable and think too much about the implications of the cover story.

The first of the two other stories features Joe Gill writing a tale illustrated by Steve Ditko about a woman whose one true love went out to sea and never came back, but a mysterious stranger does come . . . complete with amnesia. When she’s visited by the ghost of her lover, the amnesiac walks through the spectral figure and they merge into one and she gets the best of both worlds! The new man she’s fallen in love with is both her lost lover and her new love in one!

Only scratching my head a little on that one…

The second story: Nicola Cuti, writer, and Joe Staton, artist, bring to life the story of a family werewolf curse that was transferred through hypnosis to a man who was not part of the family so they could research a cure and not have to experiment on their actual relative.

Finally, the main event. The cover story. Joe Gill and Tom Sutton tell the story of a man and his mother. His mother is evil, but she wants him to marry . . . so she can inhabit the body of their child and she can become her own grandchild.

You see, she’s been doing that for a long while. Hopping bodies and generations.

She dies. They marry. They get pregnant. The portrait from the cover image (which, strangely, is ALSO the splash page for this story) seems to be possessed and in the grand climax, the bride destroys it in the fire!

Which means absolutely nothing, because the old woman takes the body of their child anyway. The end.

So much head scratching…

I love the mood of gothic movies and comics, but they can go to some weird places. So ultimately, this horror comic is horrific. Success!