It’s October 12th. Today’s issue comes out of a Marvel anthology entitled simply “MARVEL GHOST STORIES” from 2011. It’s an interesting sampling (including Silver Surfer, Captain America, Ghost Rider, and Dracula, but I chose to go with… 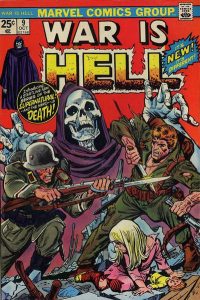 I chose this story from all the other ones because it looked like it’d be a good one shot anthology tale.

The set up was interesting enough. Aa guy walks through a bombed out city. He feels guilty. And he says he’s dead. We find out why he’s guilty and we see Death actually walking through the town as well. And there’s a big twist as he tries to save a little girl from death.

And then the big twist for me? Well, imagine watching The Sixth Sense and then finding out that the movie was actually just a pilot episode for a series.

Yes, the cover of this issue screams “It’s new! It’s different!” because the title is not an anthology book of war stories with a horrific twist ending. No, from issue #9 on it’s the tale of John Kowalski as he is cursed to die a thousand deaths because of his cowardice.

And I’m not going to lie. They got their hooks in me. WAR IS HELL’s “adventures” of John Kowalski will be going on my wish list. I’m curious. I want to see more.