It’s October 11th. This comic was purchased because of the Atari Force preview to complete my Atari Force collection, but I never got around to reading it. Superman teams up with a classic horror comic host as he enters THE HOUSE OF MYSTERY! 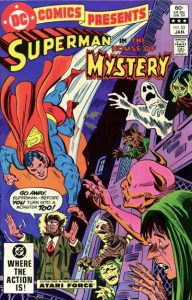 I picked up this comic for a couple reasons. First, I’d never read it. Second, it was a way to include some classic DC horror in this series.

House of Mystery is one of DC’s most famous horror titles. It was an anthology book with a regular host: Cain. So that made it an interesting concept for me. How does a horror comic host team up with a superhero? What kind of things would they need to do to make this work?

Answer: apparently, the House of Mystery is just a place in the DC Universe. (I knew it was a part of Sandman’s dream realm, but in this continuity it’s just a house down the road . . .)

That aside, the story works. This is a story where the MYSTERY is not about the WHAT (Mr. Mxyzptlk is pretty upfront about his plan from the beginning of the tale). It’s more about the HOW. How will Superman figure out what’s going on and then how will he trick Mr. Mxyzptlk into saying his name backward.

That’s where the team up happens. We get Checkov’s name mix up from the beginning of things, as Cain just CAN’T GET IT RIGHT! And Mr. Mxyzptlk corrects him every time. (At one point, Cain calls him Mr. Missile System.) On the final page, Cain says Mxyzptlk’s name BACKWARDS, but wrong. And he gets corrected.

More interesting was Superman’s journey through the House of Mystery, going from room to room and facing his fears, but also facing against CHILDREN who have been turned into real ghosts and monsters by Mxyzptlk. When you’re the most powerful man alive, a living skeleton isn’t much of a challenge, but it is if you know it’s actually a kid whose Halloween costume was made real.

Not the most sophisticated storytelling, but interesting enough to be enjoyable.