It’s October 14th. I’ve done a Superman story. It’s Marvel’s turn, now. So Spider-Man teams up with Man-Thing in what just may be one of my favorite Man-Thing stories that’s not by Steve Gerber . . . 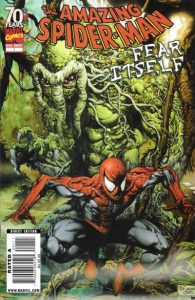 Man-Thing is one of my favorite characters, although it might be more accurate to call him one of my favorite story-telling engines. He’s not much of a character, even in his own stories. Instead, he’s a disruption. A lumbering force of nature with very, very little agency of his own, he enters other characters’s stories, drawn by strong emotions, and throws everything into chaos, forcing the characters to face a new reality (one that includes a monster) and confront their problems with this new element in their life.

Oh, and if you’re scared, well, “whatever knows feel burns a the Man-Thing’s touch.”

And so this story. It’s a meditation on fear, what it is and what it does and why it can be good.

It also falls into the body horror sub-genre, as Peter Parker gets infected and begins transforming into . . . a Spider-Man-Thing?

And then, it’s a poignant look at one of the worst fears of all. Losing your loved ones and being alone. It has a wonderful and touching and tragic twist ending that is able to give the mindless swamp creature a meaningful character arc.