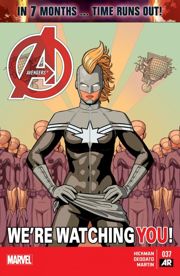 “Time Runs Out” is a Marvel event that started in September 2014. This event stars the Avengers, and is the next big part of the story that Jonathan Hickman has been telling in both “Avengers” and “New Avengers” since he took over those titles at the beginning of the Marvel NOW initiative. “Time Runs Out” is set eight months in the future of the Marvel 616 Universe, so many of the other Marvel titles will be filling in the blanks as to how things got to this point. One of the Comic Book Time Machine hosts, Matt Anderson, will be reading these two Avengers titles every month in order to fill listeners in on what is happening in the event.

My recommendation discussed in this episode: