It’s October 22nd. Part two of three first issues in Marvel’s classic monster offerings. These are books I’ve read before, long ago, and would LOVE to do some podcasting about them. For now, this is better than nothing. 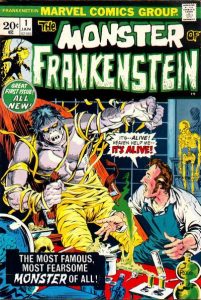 THE MONSTER OF FRANKENSTEIN #1 acts as both sequel and adaptation of Mary Shelly’s original novel, much like THE TOMB OF DRACULA. But unlike the Wolfman/Colan partnership that turned into one of the greatest comic runs of all time, this one turned into a short lived series. Like TOMB, I read this about fifteen years ago. Unlike TOMB, I do not remember much at all.

But I love the original novel. And I love Mike Ploog. And this issue, while ending on a cliff hanger, was a pretty good beginning to setting up a continuing series. I say it’s a “beginning” to a set up, because this first issue doesn’t really explain what the series itself will do. It retells the monster’s origin as some men, decades later, find a body frozen in  a block of ice.

As a monster comic, this is pretty good. As a stand alone comic, it’s not completely satisfying. I’d still love to cover this in a Marvel horror related podcast. Maybe someday…