It’s October 4th. I went to the comic shop today. Two of them, actually. And I bought a couple comics intended specifically for this series. This comic is one of them… 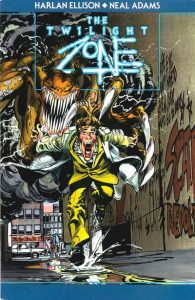 Harlan Ellison is one of the greats.

This story by Harlan Ellison is not.

This story is a script that didn’t make the grade for one of the Twilight Zone revivals that has happened over the years. But with his name, and the Twilight Zone license, and Neal Adams providing art, the existence of this book makes sense.

The set up is clumsy. None of the characters are particularly likable. It just lacks some of the “oomph” a good ol’ Twilight Zone needs. It’s rote. It’s by the numbers.

Some of the best Twilight Zone episodes ARE rote and by the numbers.

But ALL of the mediocre ones are. This one just doesn’t rise above.

I had high hopes when I opened this book. But the twist ending for ME was . . . one of sci-fi’s legends together with one of comics’ legends was unable to create a tale that was, if not legendary, at least memorable.

(NOTE: This one has a text story in it as well, also by Ellison. I haven’t read it yet. Plan to. We’ll see if that helps add value to the purchase of this comic . . .)