You are here: Home › Featured › The Secret of Secret Wars (Group) CBTM033

On January 20, 2015, Marvel Executive Editor Tom Breevort and Editor-in-Chief Axel Alonso made a huge announcement about the future of the Marvel Universe.

You may have already heard by now, but (SPOILERS) the entire Marvel Multiverse is about to be drastically changed forever.  The Marvel 616 Universe (that started in 1961) is coming to an end, and in this episode, Ben and Matt give their initial reactions to this world-shattering news.  This episode was recorded a few hours after the announcement was made by Marvel, so it features same-day speculation. 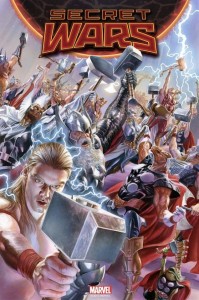 Worlds will live.  Worlds will die.  And the Marvel Universe will never be the same.

3 Responses to "The Secret of Secret Wars (Group) CBTM033"