It’s October 8th. And I’m continuing the journey into the second issue of a “trilogy” (in quotes because it was not MEANT to be a trilogy . . . it was intended to be an ongoing series). I love the Atlas collection of comics for a variety of reasons, and it was fun to dive into this series. 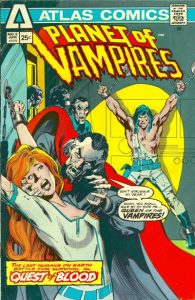 This time, they promise even more! A dark lord threatens a terrified woman while the hero is bound and frustrated because he can’t help her. Meanwhile, fanged minions enter the room ready to do lackey-type of stuff. Look at the vampire lord. “Soon shall rule by my side as . . . QUEEN of the VAMPIRES!”

Somehow, there will be actual vampires? Not metaphorical/technological ones?

The post-apocalyptic action continues as the events in the book sort of reflect the image on the cover. I mean, the two women astronauts ARE kidnapped. To be drained of their blood. Neither of them are offered the chance to be “Queen of the Vampires”.

It’s not that it’s not good. There is vibrancy to the art and the story, with its street gangs and personality, is competent. It’s just not giving me what I expected when I decided to devote three days of my horror month to this title.