It’s October 9th. And I’m concluding the “trilogy” (in quotes because it was not MEANT to be a trilogy . . . it was intended to be an ongoing series) of PLANET OF VAMPIRES. 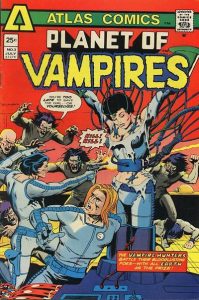 Let’s come back to the cover. There’s problems with the cover. But inside the covers . . .

Suddenly, the foot soldiers have fangs! The metaphorical vampires are literal ones! The blood plague that was staved off by draining the people of their blood causes teeth to grow! It’s like the writer was told “Hey, people are expecting vampires, not metaphor!” So he delivered.

He also delivered on the nihilism. The two males leads go on a rescue mission to get their wives back. Craig’s wife is dead. After they escape, Cris and his wife cross the country to see what thing are like around the world. At the LA zoo, they are attacked. And Cris’s wife also ends up dead. The series ends with Cris cradling his dead wife, alone.

There’s a two page spread prompting the next issue that never happened. And in it, Cris and Craig are reunited and about to fight vampire apes. Looks like they were really going to embrace the “vampires” in place of “apes” as they copy Planet of the Apes.

Meanwhile, the cover is a problem. The woman is white washed. Inside, that character is a black woman named Brenda. On the cover, she’s a white damsel in distress being rescued by two white guys. The other problem? Cris is one of the rescuers. But that other guy is NOT Craig. There is no red headed astronaut. Craig is a black man with an afro. So while Brenda was colored wrong onto cover (possibly an accident), I don’t know what the deal is with that red headed astronaut. But they intentionally left Craig off the cover. A product of the time, I assume? Whatever it is, it was purposeful.