It’s October 7th. And this time I’m heading into the first issue of a “trilogy” (in quotes because it was not MEANT to be a trilogy . . . it was intended to be an ongoing series), and I’ll be following up with the second and third issues over the next two days. 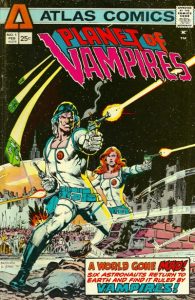 The cover promises everything.

The title: PLANET OF VAMPIRES. Just look at it.

The blurb: “A world gone mad! Six astronauts return to earth and find it ruled by vampires!”

Of course, I’m expecting Planet of the Apes . . . with vampires instead of apes. Does it deliver?

Well, sort of. The “vampires” are metaphorical. The cover doesn’t lie. The earth has been ravaged by nuclear war and, like Planet of the Apes, there are two groups: the haves (who live in a technological utopia and who are the metaphorical vampires) and the have-nots (regular people who live outside the “dome”). It’s a classic/cliched sci-fi trope. What sets it apart is that the “haves” are infected with a blood disease and they need to drain blood from the “have nots”, survivors of the plague.

So are they vampires? Yes. Or close enough for the title.

So it loses points for promising one thing but delivering something else, but it gains points for delivering a good looking book that has emotion and action. And in some ways, regular looking people doing HORRIBLE things to other people is almost scarier than actual vampires, right? Because their blood draining machines are pretty awful.

But it loses points for the math. There’s only five astronauts. And one of them dies immediately. His name? Ben. Lose points there, too.

Tomorrow, we’ll continue our journey into this horror-scape of vampires . . .