It’s October 5th. After two misses, I’m going with a surefire hit. I think. Another recommendation of a franchise I love from from my buddy JS Earls. Don’t let me down, franchise and buddy . . . 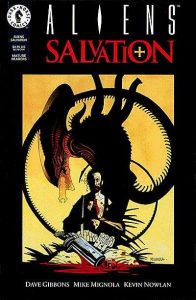 A man of faith takes on demons from nightmares and a company that does not care about the universe or its inhabitants.

This story takes the form of a prayer. A confession. As the main character must do things he regrets in order to serve the greater good. He moves from just trying to survive to realizing that his struggles is not “against flesh and acidic blood” but against the “powers and principalities of the company”. It’s a tough lesson.

The plot itself lives in the dirty physicality of a harsh world, while the ideas of the story rise above to loftier places. It’s nasty and mean, with some small glimmers of hope. It’s a powerful story that walks the line between the typical nihilism of the Alien franchise and the hopefulness that faith in something more than the physical brings.

Thanks, buddy and franchise! I liked this one.