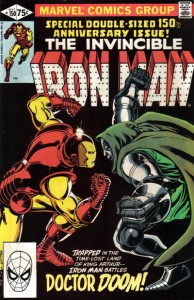 I consider this one of the greatest Iron Man covers of all time. Art by John Romita, Jr and Bob Layton.

WRITERS: David Michilini, Bob LaytonARTISTS: Bob Layton, John Romita, Jr. (Doomquest), Ron Lim (Iron Man: Legacy of Doom)PUBLISHER: MarvelI’d heard of the Doomquest issues of the Iron Man series (issues 149 & 150 and 249 & 250) long ago, primarily because of the classic status of some of the covers, and I was interested in reading them, but never really looked for them. What got my interest was seeing a collected edition of the “Iron Man: Legacy of Doom” mini-series a few years ago. I peeked at the back and saw that it was a sequel, of sorts, to those two Doomquest mini-story arcs. And that those two Doomquet story arcs were about King Arthur and time travel and . . . well, I was hooked. I snapped up the hardcover collections of both the classic issues and the sequel.

The question was simple: was it worth it? And now, all these years later, am I glad to see them on my shelf?

The first Doomquest story (issues 149 and 150, from 1981) has Iron Man and Dr. Doom thrust back in time, to the time of King Arthur and all his knights. Iron Man allies himself with Arthur, Doom with Morganna, and conflict ensues. It’s exciting seeing Iron Man and Dr. Doom’s technological armor amidst the knights of the round table and the crazy creatures of evil, and the story resolves itself nicely. 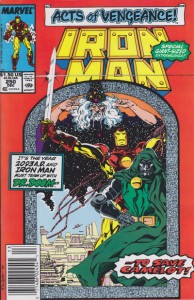 The second Doomquest story (issues 249 and 250, from 1988) pushes Iron Man and Doom into the future, where they must once more team up with Merlin to save the Camelot of the future, and the future king of Camelot — Arthur. There’s some funny twists with Arthur and his legacy and upbringing. Now, Iron Man and Doom are outclassed when it comes to technology, and ultimately this is a fun comic book trip to the future and a nice counterpoint to the first Doomquest story.

IRON MAN: LEGACY OF DOOMIron Man: Legacy of Doom, a four issue mini-series from 2008, reunites the creative team from those two Doomquest stories and takes up the themes (technology vs. magic) and tropes (time travel, although not as far flung into the future; along with the whole Arthurian thing) and wraps the story up neatly. (And like all good time travel stories, it wraps the story around as an element from the past that shows up in the future is preserved because of decisions in the present. Just read it, you’ll appreciate it.)

WAS IT WORTH IT?I liked these two volumes because it’s a good Iron Man story and a good Dr. Doom story, using these character archetypes in a way that you don’t need to know the convoluted backstories of the characters. If you’ve heard of the characters, you’ll get into the story. I also like the time travel themes that get used, and the technology vs. magic argument is explored in ways that aren’t just conflict, but philosophical concepts.When that first Iron Man movie came out, one problem I had was that there were no comic stories that were as good as the movie. These come close. Absolutely some of the best Iron Man stories I’ve read.~ Ben

Leave a Reply to HULK: HEART OF THE ATOM (review) Cancel reply