You are here: Home › Comics › HULK: HEART OF THE ATOM (review)

HULK: HEART OF THE ATOM

ARTISTS: Herb Trimpe and Sal Buscema (pencils)l; a ton of inkers and letterers and colorists 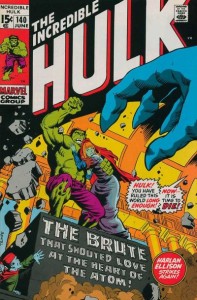 So I took a look at the graphic novels shelves at my local comic shop and found this gem that I had considered getting a long time ago. I was casually acquainted with the story inside, and decided that this would be my new comic for new comic Wednesday: a collection of stories between 30 and 20 years old.Like Iron Man’s Doomquest and Sword of the Atom (another collection I hope to review soon), Heart of the Atom takes the Incredible Hulk and drops him in a land of swords and sorcery. And for that, it’s a cool concept. It’s also developed a little further than Doomquest, as Hulk returns there a number of times over the years of publishing. (The collection alone contains ten issues from the Incredible Hulk, and one stand alone What If? issue.) Like many fantasy stories (John Carter of Mars especially comes to mind) we have a hero dropped into a strange alien landscape. This time, though, the hero is more than equipped to handle the challenges thrown at him. He is, after all, the Hulk. 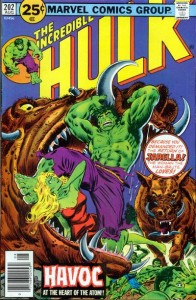 Launching off with a story by Harlan Ellison (if you know who he is, you know why that’s pretty incredible to begin with), the Hulk is shrunk down to microcosmic size where he comes to rest on a world smaller than an atom. This world is populated by creatures and people who seem to come straight out of Middle Earth or Narnia or Hyperboria and they use primitive weapons and magic and what technology they once possessed is now long gone, save some artifacts here and there used by evil people. Oh, and they’re all green.I expected this to be a “Hulk smash puny dragons . . . and medieval armies . . . and magicians”. But while that was an element, I was surprised to find out as I read through this thing last night, it was really a romance, as Hulk fell in love with the (green) queen of this world. A parallel storyline develops on earth as Betty Ross, Bruce Banner’s one time lover, falls in love and gets married as well. 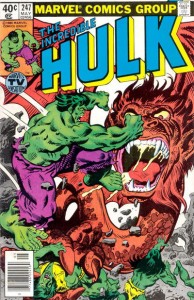 But Hulk’s relationship, and the consequences of it both in her world and his, form the spine of these stories. Since these stories develop over numerous intermittent issues of a monthly comic, taking years to come to a conclusion, I’m surprised how well this holds up as a straight narrative (although, there were a couple points where they had a page of text to tell the story of the fifteen issues between the ones they chose to put into this volume). This story is a tragedy, of course, but it ends on just the right note. Judging from the notes between stories, it seems there have been a couple more recent stories with Hulk returning to that world, but from their description I’m glad they weren’t included in this collection. That would have ruined the satisfying conclusion of this storyline. 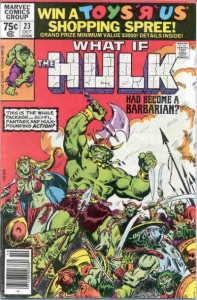 Bottom line, it’s a love story. A love story set in ’70’s and ’80’s era Marvel comics, with a fantasy background. I enjoyed it and was surprised how emotive it was. Normally, I associate Hulk with anger and rage (and there was plenty of that in this volume), but because of the magic of the fantasy world Hulk’s humanity is allowed to come into play, and his other emotions. I mentioned above that Hulk was more than equipped to handle the challenges thrown at him by this fantasy world, and that almost makes this a boring story. Except for one thing: he’s not equipped emotionally to deal with what happens. And that takes this story and elevates it nicely.
~ Ben

Ordering from Amazon using the above links helps the Comic Book Time Machine to keep flying back in time! It doesn’t add any cost for you, but it passes a bit of a kickback to us!

Using Star Wars as a guideline,  we’re exploring comic books based on licensed properties that Marve [...]

The Micronauts move from inner space to yard space as they take on one of the great dangers of the b [...]

The Human Fly travels to his next stunt location and find some real world issues that need to be tak [...]

Shogun Warriors, a Doug Moench and Herb Trimpe work based on the Mattel toyline that merged a number [...]

The coverage of Marvel’s licensed books from January 1979 ends here as we take a peek at the ads and [...]

Godzilla is shrunk down to the size of a house cat but he's still the king of the monsters! Kin [...]

Bill Mantlo's classic run begins here! A toy line with no story is transformed into an inner-sp [...]

The theft of a little girl's camera reveals an attempt to sabotage the Human Fly's newest [...]

The death wheel in the sky keeps on turning and our team doesn't know where they'll be tom [...]

Taking a look at some of the extra things going on when the comics cover dated December of 1978 were [...]

Trapped in a strange land, John Carter and Dejah Thoris find their bonds of love tested and perhaps [...]

Using Star Wars as a guideline,  we’re exploring comic books based on licensed properties that Marve [...]

The empire strikes! But it's not striking BACK...not yet, anyway. (And do they really strike in [...]

To celebrate 100 episodes of both the Marvel’s Cosmic Comics sub-feed AND the main feed, we cover Jo [...]

With news of Carrie Fisher’s passing, plans changed and Ben take a look back at the comic book mini- [...]