It’s October 2nd. Last night I binge read the final six issues of ALIENS: DEFIANCE. I honestly planned to do something similar tonight. But . . . well, it just wasn’t quite as exciting. 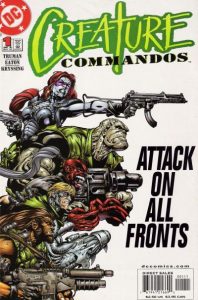 But I could barely get through issue 1. Not because it’s BAD, just because I’m tired.

This issue was a great set up and it had interesting things happening. There’s marauders from another dimension. There’s body horror as a World War II vet wakes up and realizes that he should be dead but he’s not AND he’s a machine. There’s a team of monster soldiers who have fun dialogue. There’s a mad scientist who shouts: “He’s ALIVE!”

I really want to see what happens next. But it’s going to wait until either: A. I’m done with this October series, or B. I run out of comics to read and decide to read issue 2.

For now, I’m enjoying my horror comic reading. It’s fun knowing I’m going to finally get to some of these comics I haven’t had a chance to read yet.