It’s October 1st. I had thought about doing a podcast episode every day of October leading up to Halloween. Then I remembered . . . there are other things in life that I need to do.

It would be one scary comic every day. Or at least one comic that was MEANT to be scary every day. But I dismissed that idea even as I assembled a pile of horror comics. Comics featuring monsters on the prowl and on the loose and on the go or whatever.

And so, as I picked up a graphic novel containing the second half of the Aliens: Defiance series recommended to me by my buddy JS Earls, I realized I may not be able to podcast every single day about this stuff, but I sure as heck could READ one every single day. And maybe journal about it? 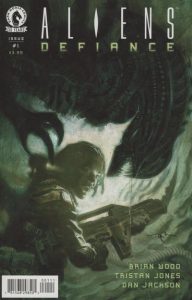 Aliens: Defiance was an interesting story. Each issue was actually labelled “Episode 1” in the story’s title, and at first I thought that was a bit strange. But then as I read along, it made sense. This read like a TV series. In the “pilot episode” we’re introduced to our main characters and some of the main problem that’s going to drive the story engine. And the story engine itself, once it gets going, is enough to carry the series. But each issue is a self-contained story along the journey, with the bigger story creeping along in the background.

The story: basically, a disgraced and injured marine ends up on a mission with an android who is gaining self-awareness and a moral compass. Together, they change the parameters of their mission. They are going to follow the path of the Xenomorphs and wipe out any trace of them before the company can get samples.

And it works. This was a well paced series with interesting twists and turns. I liked it quite a bit.

This blogging journal journey thing through the comics I read this month is starting out strong.