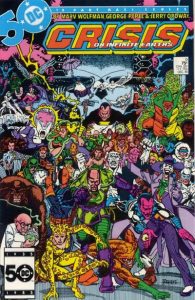 Matt is reading through the historic maxi-series, Crisis on Infinite Earths, for the first time.  The original Crisis was released during 1985 and 1986, and was ultimately used to reboot the DC Universe.