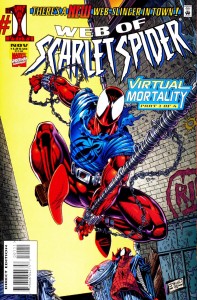 “Spider-Verse” is a Marvel event starting during the fall of 2014.  In this event, every Spider-Man from the entire Marvel multiverse will be featured during the course of the story.  In order to prepare for this huge spider-centric event, one of the Comic Book Time Machine hosts, Matt Anderson, will be reading important story arcs that set up “Spider-Verse.”In the second episode of our “Spider-Verse Prerequisites,” Matt is joined by his friend, Ben Avery, as they give their opinions on the controversial Spider-Man storyline from the 1990’s, “The Clone Saga.”  Ben Reilly is the main focus in this 1990’s story, so instead of going issue-by-issue, the Time Travelers unpack the history of this divisive character.

Ben Reilly’s first appearance as the Spider-Man clone was in The Amazing Spider-Man #149 – Cover date: October 1975