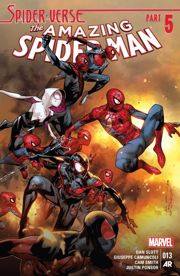 “Spider-Verse” is a Marvel event that began during the fall of 2014.  In this event, every Spider-Man from the entire Marvel Multiverse will be featured during the course of the story.  “Spider-Verse” officially kicked off with The Amazing Spider-Man #9 in November of 2014.  In this two-part podcast series, Matt is joined by his friend, David Hunt, as they discuss the recent Marvel releases that make up the total “Spider-Verse” event (including all of the tie-ins).