You are here: Home › Daniel › No World Escapes the Manhunters (Daniel) – CBTM076 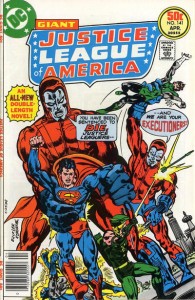 Daniel continues his quest to better understand one of his favorite comic heroes Mark Shaw by looking at his third appearance, *Justice League of America *141. The story from 1977, “No World Escapes the Manhunters!” by Steve Englehart sees the Justice League fighting the Manhunters on three fronts as the Manhunters attempt to discredit the Green Lantern Corps. The history of the Manhunters is revealed! And heroes have to make hard choices in the name of justice.