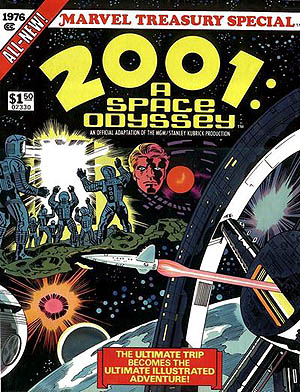 The cover to Jack Kirby’s adaptation of 2001: A Space Odyssey. Just looking at the cover gives you an idea of the contrast it has to the cold realism of Kubrick’s movie.

In 1968, Stanley Kubrick changed the face of science fiction cinema. In 1976, Jack Kirby adapted it into a comic book?

Yes, and it is SO Kirby.

In this episode we are going back in time to read some of the Marvel licensed sci-fi comics that were already running the month that Star Wars #1 (cover date July 1977) hit shelves. So in this episode we’re covering those three titles and looking at the issues that were released in the preceding months.

* INTRODUCTION (0:00-10:45) Introduction to how this series of solo episodes will work and what I’ll be covering

One of the theatrical posters, illustrating a similar scene as Kirby’s cover, gives an idea of the stark tone Kubrick sets for much of his movie, and stands in stark contrast to Kirby’s cover.

Buying comics at MyComicChop.com or buying ANYTHING at Amazon.com helps support the show!